Compiled from various sources on the internet, friends and experiences. 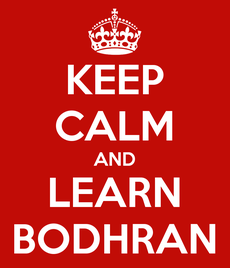 The bodhran player has to operate by a different set of rules if they are to play in sessions with other musicians. There are several reasons for this. First the role of the bodhran is different than most drums, in that it doesn’t drive the music but enhances it only. Another problem is that the bodhran is one of the newest of traditional instruments and as such many traditional musicians feel it doesn’t belong at sessions. The last problem is that anyone can bang on a bodhran and there is a history of drunken tourists grabbing their new drum that they have never played before and joining the session.

1. It is far better to play very quietly and be thought a beginner than to play loudly and remove all doubt. When you are first learning, the other musicians will greatly appreciate that approach and they may invite you back.

2. Learn to adjust the tone of your drum. The subtle sounds of the bodhran are important and nothing will get you an invite to leave quicker than a tin sounding drum. If you don’t have an adjustable drum learn to use water. Very inexpensive drums can be made to sound quite good. In time you will develop your own sound.

3. Learn to read the leader’s body language. Every group has one or two leaders and they will react to your playing. Watch that closely and you will have a constant critique of your playing. If used properly this will ensure you a spot at the session.

4. Learn the music. It is important to get familiar with as many tunes as possible. You don’t need to be able to read music for this. When you are at sessions and there are tunes that you like, ask the names of them (they may not know or there may be a couple) and then find them to practice with.

7. If you are interested in playing the bodhran because it is easy, cheap, you don’t have to read music, never been able to play an other instrument or all of the above, do everyone a favor and nail it on the wall as a decoration. If on the other hand when you first try it something inside starts to boil and you can’t put it down, there is a chance. Be considerate of others and always keep in mind that if you can’t stand your own playing neither can others.

Basic rules for all beginners

One bodhran at a time, let the senior musicians go it alone when things get hot.

The beginner bodhran follows the rhythm.

Play quietly at first. Remember that the Bodhran sounds louder 2 seats away than it does in your lap.

Listen to the tune and pay attention.

Don’t be a Moron take turns on the Bodhran!

Don’t arrive to a session early as a beginner to secure a good seat at the front. Just like any musician you have to earn that spot.

Communicate with other Bodhran players as to taking turns to play. Most sessions can only take one Bodhran at a time unless there is a massive number of musicians playing at once.

Don’t start playing at the beginning of each tune. Let the tune play through at least once before you join in.This will give you a chance to establish things like what tune is being played, who is the leader and at what pace etc.